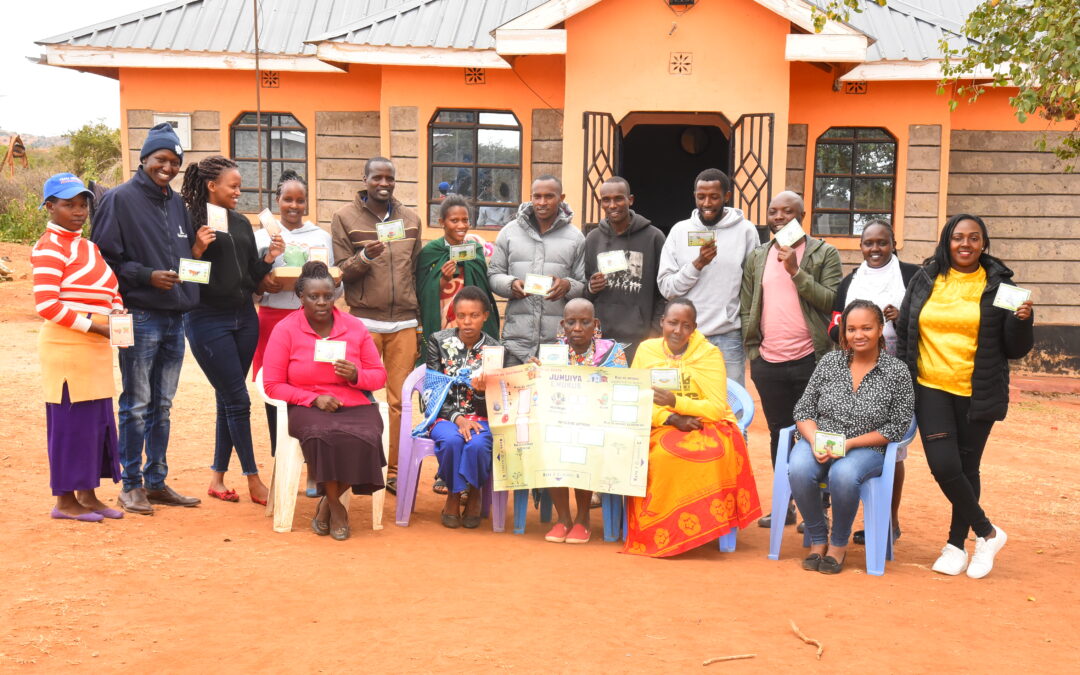 When I was approached to help with Day of Adaptation (DAYAD)’s newest project, adapting its climate board game Minions of Disruptions for use in Kenya, I’ll be the first to admit it: I was skeptical. Not about the game – as a life-long game enthusiast, I love playing Minions of Disruptions and stand firmly behind DAYAD’s prioritization of connection, dialogue, and fun when it comes to addressing the climate crisis. I was worried that the game may not be wanted or welcomed by those it intended to help and about inadvertently pushing a Western view of climate change onto communities who are already experiencing the impacts – and have virtually nothing to do with the cause. The effects of climate change are already notable in Kenya, with social processes including urbanization and population growth exacerbating the impacts of floods and droughts all over the country. These hazards disproportionately affect rural, pastoralist, and financially insecure communities, creating a pressing instance of climate injustice.

Were we introducing a game to communities when what they needed were specific, tangible interventions to improve access to drinking water? Or drought-resistant cattle? Or school fees?

When we began to meet with our project partners, Simavi, Proportion Global, Kenya Water and Sanitation Civil Society Network (KEWASNET), Center for Social Planning and Administrative Development (CESPAD), and Neighbours Initiative Alliance (NIA), my hesitancy quickly faded away. This article follows our game adaptation journey in-progress with my reflections on the process as a collaborator and new DAYAD team member.

Participants of the game prototype testing in Kajiado County, Kenya.

This project utilized an accelerated version of Human-Centered Design and had four distinct stages, or “sprints” —scoping, research, design, and iteration. Each sprint was brief, but still ripe with enriching discussions as we ensured the relevancy of this version of Minions of Disruptions for the target communities and local organizations.

Because it was important to understand the Kenyan context and decide on a further localized area for the prototype, the Scoping Sprint was full of story sharing from our Kenyan partners. They showed us pictures of the important work they’ve implemented on the ground, from the Kajiado Youth Parliament to integrated agriculture projects aimed at improving food security, and many others. Our discussions also extended into some of the areas I was initially concerned with — including power relations and climate justice — and speculations about how to incorporate these complex topics into a game. It was, of course, going to be quite a tall order to include all the intricacies of these complex issues into a game while keeping the game fun, but I was encouraged by our conversations and the group’s commitment to keep social factors at the forefront of planning. We settled on focusing our efforts toward rural communities in Kajiado County, which meant the game was going to be reaching communities far different than the original Dutch context. How were we going to effectively reach Maasai pastoralists, women and girls, and community members with varying degrees of power, with just one game?

The Research Sprint encompassed two parts, desk research and field research, and the field research portion was instrumental for the later stages of the project. The NIA, CESPAD, and Proportion teams traveled to Kajiado and spent time in the county, speaking with community members about their lives, their values, and views about climate change. This illuminated how essential cattle are for many families in Kajiado and the complex relationship between water, cattle, land-use, and livelihoods.

With ideas churning from the Research Sprint, we began the Design Sprint with everyone drawing their own story boards. We voted on the different game aspects that we wanted to see in the first game prototype, and the DAYAD team used this collective vision to draft the first version of the game. While many game elements are similar to the original Minions of Disruptions, this version relies heavily on icons and images, rather than words, to be as accessible as possible to the low-literacy groups who will be playing it. After much back-and-forth between the partners to ensure that the icons chosen were clear and understandable, it was time to test it out. 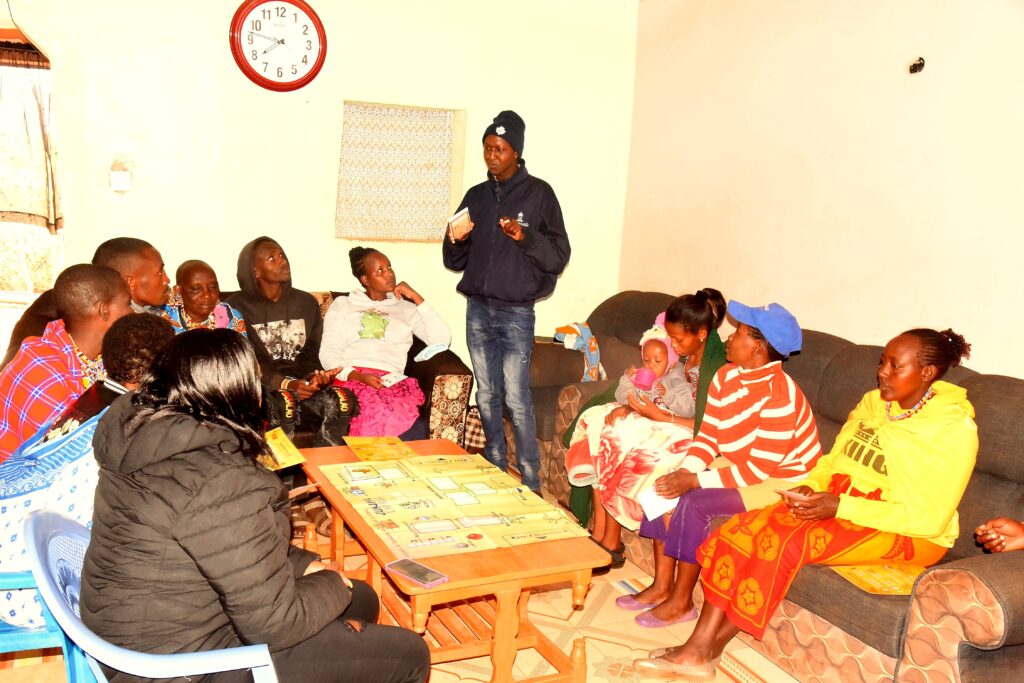 A facilitator from our partner organisation in Kenya explaining the game rules.

Of course the first iteration of a game will not be perfect, but I was not prepared for how well this first game prototype was received by the focus groups. Participants expressed surprise about how much they learned about climate change and climate adaptation, and felt motivated by actions other players were taking to try to mitigate the disruptions. Perhaps most importantly, the connection between the game and the lived experiences of the people playing it was deeply experienced. One elderly participant felt this in relation to cattle, saying that their “hand is shaking from having to erase a cattle from the household resources,” and another observed that they “would rather have a cow and lose everything else.” Participants also felt that the game should be integrated into all aspects of society, specifically calling in women and youth: “our women play an important role in the economy, [and] they should be part of this game since they make a lot of decisions,” and “there is need to mix the youth and wazee [elders] since the youth need to learn alternative livelihoods but the old will help slow them down.”

Just as the participants were receptive, our local partner organizations are seeing how Minions of Disruptions can fit into their advocacy toolkits. After the final Iteration Sprint, Minions of Disruptions could begin to be coupled with workshops about climate change, integrated into participatory empowerment programs, and used as a tool for triggering discussions in the community, among others. I am hopeful for a future where Minions of Disruptions Kajiado sparks conversations among people who otherwise would not interact, and that through these interactions communities feel inspired and empowered to take action to help increase the climate resilience of the whole community – with the support of their fantastic local NGOs, of course!

The goal of this project was not to create the perfect game, but to prove the viability of the game as a communication tool with value for organizations like NIA, KEWASNET and CESPAD in their rural, community-based work. In demonstrating that this new co-created climate game can have a positive impact in rural Kenya, it also makes a case for bottom-up climate action empowerment everywhere. By emphasizing this co-development process and partnership we’ve shown that fun initiatives are not solely a privilege for those in the Global North. It is possible to harness the power of play, collective action, and community dialogue in a way that is relevant and meaningful to societies who may have very little space for games or leisure time in their everyday lives.

It will take more than just one game to topple the global systems of climate injustice or the gendered power dynamics that further stratify the impacts of climate change in a community. But maybe that one game can help to grow the network of people excited about climate action who understand that we need everyone to tackle the climate crisis. I started this project skeptical that we could overcome the pitfalls of international development work, but as we near the end of this project I feel confident that the game we created together has the power to make a positive difference in Kajiado and to renew excitement about the potential of co-developed, localized climate adaptation initiatives. Who knows what kinds of innovative and new ideas will grow out of these conversations? I, for one, cannot wait to find out.

About the Author: AnaCapri Mauro has an M.Sc. in Disaster Risk Management and Climate Adaptation from Lund University, Sweden, and a B.A. in Environmental Studies from Lewis & Clark College, USA. She is passionate about understanding and communicating the relationships between humans, landscapes, and hazards – especially when there are volcanoes involved.